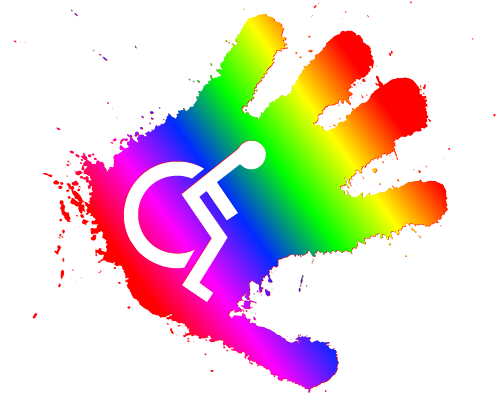 In this incredibly powerful piece, genderqueer disabled guest writer, Becca Baker, takes aim at those that would appropriate disability for their own selfish motives.

In the past few days, as a result of publishing a long piece on my physical and mental health, I’ve had offers to write for a few different places. Start-up magazines, blogs, nothing major. Most of them have phrased their offers around the idea that I’m an inspiration, how I’m managing with my health and being so open about it, going about my daily life with that as a factor, and somehow that will inspire people. Inspire them to do what, you ask? How does my terrible physical state in any way inspire you to do something?

Oh yes, it doesn’t, because it’s not really about being ‘inspired’ at all, is it? It’s about sharing a story of adversity and triumph, about people looking at my life, laid bare in  print, and going “wow, at least my life isn’t that hard”. It’s about managing to adapt to daily life and do normal everyday things that normal people do. It’s a message of “wow, if they can get on with things then what’s my excuse?” or at times even just a chance to read a sad or feel-good story of how a person has overcome their disability and learned to cope. Hooray! Happy endings!

How does my terrible physical state in any way inspire you to do something?

They want a sanitised version of how life is, a vague notion of illness which doesn’t really have much of a description. They don’t want the symptoms; the incontinence pads and catheters, they don’t want staying in bed because everything feels so horrible and wrong, or being unable to get dressed without help, falls and injuries. They want a vague idea of some nightmarish scenario that somehow you consolidate with your life and you come out stronger. They want bravery from you, a sense of not giving up no matter how hard it gets.

While for some that can happen, it’s certainly not true for a lot of people with disabilities, illnesses, chronic pain, mental health problems and so on. My life is an ongoing battle with symptoms that pop up, criss cross, affect one another, and it becomes a huge mess of not-coping. I’m not getting a happy ending and I’m not triumphing over my life’s pitfalls, I’m living through them, I’m learning to adapt to them because I have no choice. There are some things where I haven’t learned to adapt at all and have no intention of doing so because I know the difficulties that will be involved. I’ve lost my entire future to disability and no attempt at getting it back will work. Am I less brave for not trying now? Less inspiring?

They want a sanitised version of how life is, a vague notion of illness which doesn’t really have much of a description.

Asking a person kindly and respectfully to write a piece talking about how life is for them and how it will all play out in future is one thing, but a lot of these offers don’t come in that way. They’re abrupt and to the point. “We want your story, you could inspire a lot of people.” They pay little mind to the fact that the story in question is a life. They’re asking to take a piece of you, lay it bare online for all to gawp at. Your words, your life, your struggles, so that people can read and marvel at your world, be amazed at how you manage to do all these everyday things like a normal person does. It’s disgustingly exploitative. It’s unbelievable how many people offering these writing opportunities will outright refuse to pay for your time and effort. There’s the idea that the offer of a platform, however big or small, is compensation enough. “It gets it exposure, so many will read it!”, “you get to spread awareness.” It’s as though they’re doing you a favour by putting it up, rather than you doing them one by giving your labour and a part of your life to them.

It goes down the same kind of line as ‘the only disability in life is a bad attitude’. You become a shining example of the Good Disabled who gets on with daily life and wow, even though it’s all so shit and depressing and clearly very awful you can still smile and laugh! Who knew?! The default consideration of disability is that the person who lives with it must be in abject misery; there’s no nuance in the overall message, that you can have a complex life with ups and downs, just like everyone else, or even of the vast differences in the wide spectrum of disability. All that’s really wanted is, once again, “at least I don’t have to live like that, I can’t complain.”

They pay little mind to the fact that the story in question is a life. They’re asking to take a piece of you, lay it bare online for all to gawp at.

This has become particularly insulting of late given all that disabled people are facing in the UK. The lives found so inspiring, the lives that readers use as a yardstick to measure how good they should feel about their own lives, are being turned upside down and inside out by austerity. We’ve been facing cuts across the board, from our housing, our Motability cars, we’ve seen cuts to our benefits, increasing use of food banks, energy poverty meaning you’re having to keep the heating off to the detriment of your health,  and more and more sanctions. There’s the Bedroom Tax, the struggling mental health services so badly underfunded that even if you need help dealing with it all, you could find yourself refused or waiting a long time. Of the demographics that are most impacted by the cuts to social security, health, and social care, disabled people find themselves ranking top, taking the brunt of the hardship.

I’ve seen immense hardship among my circle of elective family and friends. I’ve seen a lot of pain, terror, and panic attacks at rumours of more and more cuts being announced or leaked. The dread of the brown envelope coming through the door and the understanding that you probably won’t get the help you need. Even if you’re too ill to leave the house, you’re expected to move into work anyway, leaving you with nothing and no hope of gainful employment. You have the constant despair of knowing that the inevitable brown envelope could ruin your life, spell homelessness, starvation, and poverty.

The lives found so inspiring, the lives that readers use as a yardstick to measure how good they should feel about their own lives, are being turned upside down and inside out by austerity.

As well as completely papering over the hardships to keep this vague, homogeneous and inspirational idea of disability alive, it also ignores what can be considered huge triumphs. Getting out of bed is a mammoth task at times, it can deserve a round of applause. Taking a shower? Get out the party poppers! They’re things that you can be proud of, achievements people don’t expect or understand, but achievements nonetheless. They’re achievements no one wants to hear about. Reading someone going on about their daily life and struggling but overcoming each little challenge presented just isn’t inspiring enough. Making a meal or going shopping just doesn’t give the same sense of personal gratification as someone who, say, has a job, children, or gets an education in spite of it all (I use ‘in spite’ here as it’s precisely how it’s put forward, a triumph over disability rather than it being a part of you).

If you ever feel like offering someone a platform to speak about something personal on your website, or an ‘opportunity’ to write an essay for you, seriously consider what it is you’re saying to not only that person, but to those who read it. I’ve seen an astounding lack of consideration in this area for years and it’s infuriating, I’m not tolerating it anymore.

I’m not your inspiration.