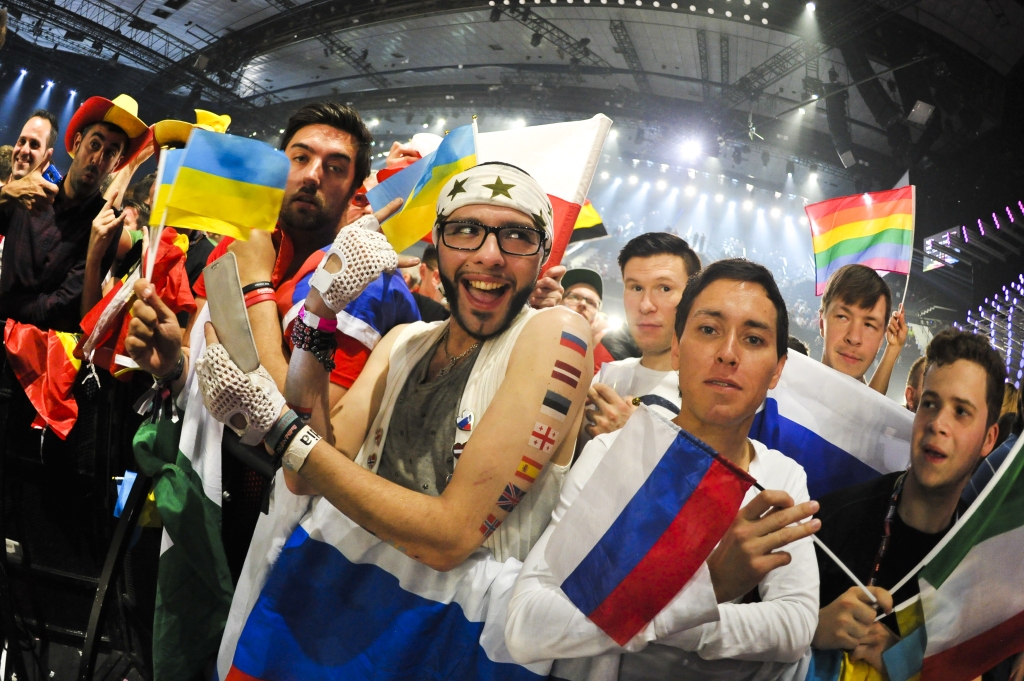 Can the LGBTQ+ pride flag ever be non-political, and should Eurovision even try to insist that it is? In her latest blog Karen Pollock discusses the issue of asking for ‘non-political flags only’ at this year’s Eurovision.

It’s almost time for the biggest camp party of the year, otherwise known as the Eurovision Song Contest, that celebration of glitter, tight white  T-shirts and ballads about historic injustice (all non-political of course). I can’t remember the moment when Eurovision switched from being the guilty secret you enjoyed privately to something so uncool its hip, but it’s embedded in our culture now. Expert Eurovisonistas point to the victory of Dana International as the probable queer tipping point. Today, Eurovision has been adopted by many as a celebration of all things queer, a moment when the rainbow nations come together.

Given this, and the way organising cities have embraced the pink pound, I was surprised to see Catherine Baker tweeting about their flag policy yesterday. Part of it states that only “non political” rainbow flags would be allowed at this years event in Stockholm

Rainbow flags and the European Union flag will be tolerated provided they will,according to the evaluation of the organisers, not be used as tool  to intentionally make a political statement during  the show.

The wonderfully euphemistic “rainbow flag” is an increasingly common way to refer to what some would call the pride flag, a banner that has been declaring, we are here, and we are queer since 1978. In the wake of the assassination of Harvey Milk a visible symbol of (what was then known as gay pride) was quickly adopted. Here in the UK we may have legal equality, but I wonder can we say openly being LGBTQ+ is non-political? Whilst Dr Baker expertly explores the geopolitical pitfalls of a flag policy, she also points out that:

When you are LGBTQ+ is there not a sense in which celebrating your identity is always going to be political, especially in a climate of increasing anti-LGBTQ+ feeling, and legislation? Or perhaps I should rephrase that, because of course it is one section of the community who are being banned from bathrooms and threatened with guns.

If someone takes a trans pride flag to Eurovision will that be seen as a political statement, but the rainbow flag, just nice window dressing? Leaving the decision of whether a flag is being waved for acceptably non political reasons will, its sad to say, mean those whose identities are the most marginalised are most likely to be censored.

Whilst an individual may feel they do not want to be political, LGBTQ+ is a politicised identity. It is impossible to escape the fact that across the world, and in some of the countries taking part in Eurovision,  LGBTQ+ individuals face persecution, imprisonment and even death. In the past couple of years the crowd has shown their feelings towards Russian entrants by booing them, but Russia is not alone in having anti LGBTQ+ laws and policies. Armenia is ranked 47 out of 49 in for LGBT rights in Europe. Azerbaijan, at 48 discriminates against LGBTQ+ people in almost all legal spheres of life. Turkey is not competing this year, but the murder of trans women (many of whom are forced into survival sex work by a society which is deeply transphobic) is an issue many, shamefully, ignore. In an interesting move to possibly counter some of the previous anti-Russian sentiment, this years entry looks like he has stepped straight from an Attitude cover shoot. Cynics might say that while oppressing LGBTQ+ people at home Russia is content to appeal to the gay male vote to win a song contest.

There is nothing wrong with just wanting to party, and I am not arguing that people should choose their Eurovision faves after investigating a country’s human rights record. After all I loved the Russian singing grannies as much as anyone. However it seems deeply disingenuous of the organisers to court LGBTQ+ people, to use us as diversity window dressing, but only if we leave anything as inconvenient as our identities at home. Currently the EBU are saying the flag policy was a draft, released by mistake. It’s interesting to note that they themselves say they want to rainbow flag to represent diversity, not to actually be diverse, a performative version of representation which sounds like a tick box exercise. The statement also makes no mention of the demand that only nice, non political queers will be allowed to wave their flags in Stockholm