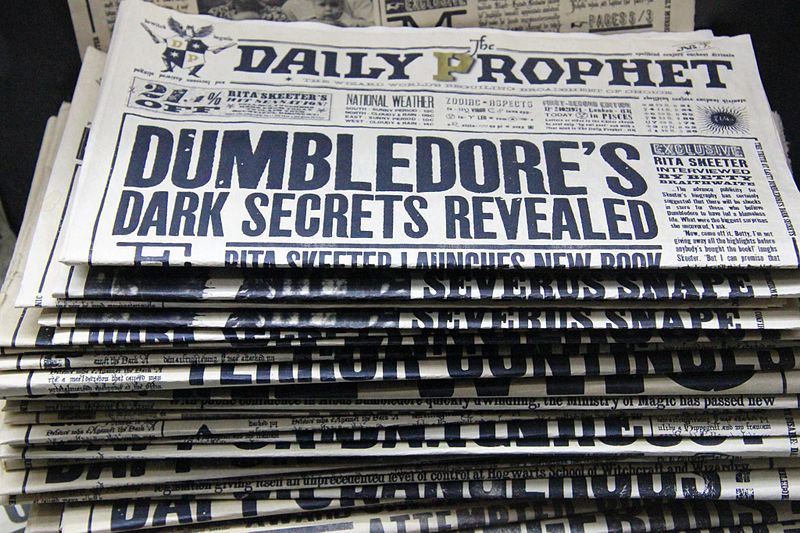 With the release of The Cursed Child, Karen Pollock and Stephanie Farnsworth discuss LGBTQ+ representation in the Harry Potter series.

Q: There were a lot of people upset that Dumbledore never actually confirmed that he was gay within the Harry Potter texts. Some accused Rowling of only referencing it as an afterthought so that it would not impact book sales. How do you feel about Dumbledore’s portrayal?

Karen: The very first time I read the Deathly Hallows it seemed obvious to me that Dumbledore and Grindelwald were in love, so obvious that the “but she never said” complaints seemed quite odd. There are a couple of points to make though, was I reading as an adult, in a way a child (the book’s intended audience) might not,  and is any person’s interpretation cannon? One could say that those who did not see Dumbledore as LGBTQ+ are simply interpreting the novel differently from me. Is that not why we read books? To make them our own, to bring our own understanding to the process of engaging with a text?

The question is, fundamentally, one of writing, and our response to it. I saw Dumbledore as being in love with someone of the same sex, another person did not, are either of us able to claim we are right, and the other wrong? When it comes to a response to a piece of art, to widen it slightly, are words like right and wrong even relevant?

What I do know, about the writing I like, which of course I refer to as good writing, in that way which we like to claim our tastes are valid, by simply being our tastes, is that scenes where there is exposition which seems to be tacked on solely for the benefit of ticking a box, which do not grow organically, always jar. When exactly would Dumbledore have said he was gay? Which scene would people add? Teachers do not generally talk about their sex lives with pupils, and we know very little of the home lives of any of the staff. Professor McGonagall could be a bisexual top who likes picking people up in the Leaky cauldron. Flitwick could be a trans man who pops back to St Mungo’s for his T each month and Dumbledore? For all we know he goes down the Wizards Staff (the leading wizard gay nightclub) every Friday to pull twinks.They wouldn’t talk to their pupils about these things, so we the reader would not know.

There is a discussion which could be very helpful to LGBTQ+ teachers about the fact they are often discouraged from being open about their gender and sexuaity to pupils. I know of teachers who have been sacked, or encouraged to leave because they were open, others who fear coming out because of the impact it might have on their careers. This is not in the remit of the books of course, but it does strike me that those who say Dumbledore could have just said, are ignoring the very real issues LGBTQ+ teachers face, and speaking from a place of privilege.

Steph: I agree. When I read Dumbledore’s letter to Grindelwald it just screamed ‘love’ to me. I thought it was obvious. It seemed to encapsulate the age old cliche (that does happen again and again) of the teenager in the closet who falls for his/her/their best friend. I don’t think it was any coincidence at the time that it was all of my straight friends who were outraged that Rowling had never mentioned it before; they have never been in that situation and have never had to read between the lines as their attractions never had to be hidden.

I do think that characters shouldn’t have to be overt. LGBTQ+ characters are in every single walk of life and we shouldn’t need it tattooed on our foreheads for people to understand. The assumptions about people who ‘pass’ and who may be LGBTQ+ and the default idea that all people are cishet until they say otherwise is really pervasive and a massive problem. It basically forces a cishet existence onto everyone. That said, the biggest disappointment was that there wasn’t a little bit more. Maybe a passing comment about two girls kissing that Harry walked by and they ran, thinking Umbridge was coming, or maybe Hagrid talking about an old boyfriend or whatever. Just something to make it seem like there was actually an acceptance of LGBTQ+ identities because for a world that is supposed to be beautifully diverse, where nobody should be in the closet, Dumbledore does seem to stick out like a sore thumb because he is the only gay character ever even mentioned.

Q: Rowling has tended to take the position that characters can be LGBTQ+, people of colour, disabled etc but often without writing it specifically in her texts. The most famous example is saying that of course Hermione could be a person of colour, but is this an effective technique to make stories more inclusive? Or should diversity be explicit?

Karen: Perhaps the question is why do people assume Hermione is white, or Neville neurotypical, or Tonks cis? They do so because when we read a novel we tend to picture the characters as being like us. That’s fine, in a personal response, however people move from the stance of “this is my interpretation” to “this is the only interpretation” without recognising that they are claiming a false universality. Shakespeare is very interesting in this respect.. A number of writers from different cultures and societies have discussed how their first response to his work was that he must be X, where X is a member of their society. I once read a Japanese playwright discussing their shock on discovering as a young man that Macbeth was not about the shogunate era.

A work of art, if it has merit of itself, is more than an exercise in teaching diversity, it has to be. If we assume a character shares traits with us, which are never explicitly described, that’s partly the strength of the depiction, but also a feature of our society. We (as in white, cis, western) people tend to assume that by default a hero will be white, cis , abled, western, because that is what we are taught heroes look like. Rather than criticizing Rowling perhaps we need to look at our own biases and assumptions about what heroes look like?

Steph: I do think that writers have a duty to be explicit when it comes to diversity. Our society is organised in such a way that it’s always going to erase the existence of people of colour, LGBTQ+ people, sex workers, neurodivergent people and deaf and disabled people when are where possible. The default assumption is always going to erase this too and the audience and publishers are both responsible for this so the responsibility does lie with writers.

Writers have the greatest job they wish to and they are paid for it so shouldn’t they create something different? All of our stories focus upon white, cisgender, straight middle class, neurotypical, able bodied men. The writer’s responsibility is to challenge audiences and engage in creativity and by including diversity then this does that. It isn’t particularly hard either to make reference to a facet of a character, often a few words will do. As long as society priotises certain lives over others, books are going to be twisted and characters will be erased to fit that agenda and writers should stand up to it.

Q: There’s one study that has linked people who read Harry Potter with being more LGBTQ+ friendly but how much do the texts actually support LGBTQ+ people?

Karen: What does LGBTQ+ support look like? The books teach that friendship is a positive, that bullying is wrong, that judging people according to who their parents are, or their group within the wider society, is wrong. At their core the books are about accepting difference, of all kinds, if children come away, learning that lesson, they will be better human beings. Will that include being more LGBTQ+ friendly? I hope so, but more importantly it makes them more human friendly, less likely to judge someone by a label, and more willing to see that muggle or wizard, we all have value.

Steph: One of the big issues I’ve had with the Harry Potter series is that it tends to rely on metaphors to depict bigotry. Yes, the obsession with pure blood reflects a lot of racist and antisemitic hatred that we have experienced but in all the texts there is only one incident that seems to reference hatred towards people of colour. The only strong point of Ron is that he reminds the audience of how deep rooted classism is in society but apart from that, it seems that other forms of hatred are ignored.

The metaphors are used are great at telling people to treat each other with respect, and arguably some of the best quotes in literature have come from these texts but there’s little acknowledge of how hatred impacts people in the muggle world. The focus on magic makes hatred seem far removed and as though our society doesn’t have issues. The books are terrific at sending messages against bullying and oppression but they hardly ever make reference to the oppressions that are rooted in our society which makes the texts effective at developing empathy but doesn’t highlight where we should be looking at in our own society to see hatred.