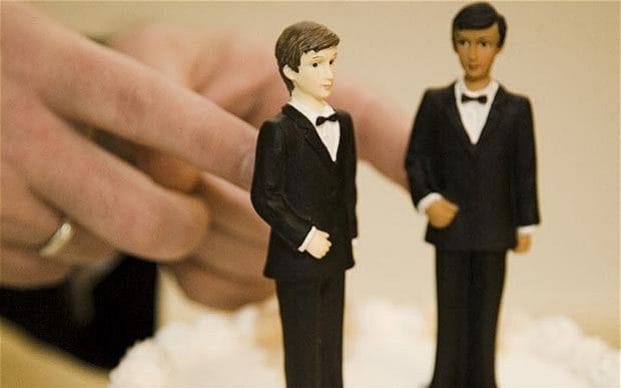 Transport for London’s decision to introduce more inclusive language has provoked outrage – and not just from those you might expect. Lee Williscroft-Ferris takes issue with selfish cis gay men.

When Transport for London announced last week that they intended to change their announcements to make them more inclusive, the majority of responses were as hysterical as expected. Indeed, the internet imploded with collective pearl-clutching at the prospect of the capital’s transport network recognising the existence of gender-variant people. The transition from ‘ladies and gentlemen’ to ‘hello, everyone’ would, apparently, bring about the destruction of humankind as we know it and usher in a world of persecution of the ‘normal’ at the behest of the ‘abnormal’, the ‘ill’. That the majority of these people would never have noticed the difference had the change been ushered in without fanfare is just one token of the ridiculousness of the backlash.

We’ve come to expect hysterical reactions from cishet people to any measure designed to improve the lot of LGBTQ+ people, TQ+ people in particular. While same-sex couples bask in the relative sunshine of marriage equality and increasing social acceptance (accepting that the situation is not as rosy as many would have us believe), the outlook is far more grim for our trans, non-binary, genderqueer and genderfluid comrades. Cisnormativity rules the waves; transphobia is rampant. As the most recent Pride in London debacle demonstrated, the erasure of TQ+ people by cisgender gays is a stubborn stain on our so-called community.

Scrolling down my Facebook news feed, I came across a link to an article about the TfL decision posted by none other than Attitude magazine. Interestingly, rather than welcoming the decision, the post posed a question to its readers: ‘Is this a step in the right direction?.’ In the age of clickbait and headlines designed to provoke rather than promote, this isn’t entirely unusual. However, in effectively inviting what the author of the post must have known would be a torrent of transphobia, the magazine betrayed TQ+ people even before the first ‘Angry’ reaction or hate-filled comment had been added underneath.

Luckily, there were actually a few more enlightened individuals on hand to counter the hatred: 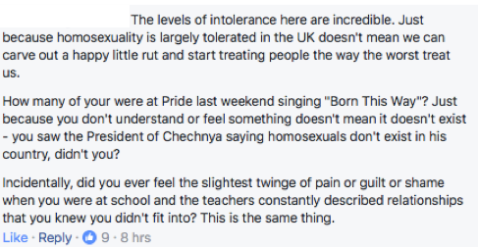 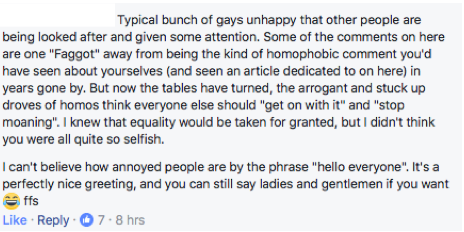 Being a cis gay man myself, I am floored by the utter contempt shown by others towards some of the most oppressed, vulnerable members of our community. Humans are, by their very nature, selfish – that’s just basic anthropology. However, those who so readily forget their own struggle for equality and not only refuse to support but actively seek to denigrate those for whom acceptance has been less forthcoming, are a whole other category of egotistical.

Perhaps it’s because I’m very choosy about who I spend my free time with; maybe my intersectional outlook blinds me to the reality of the pervasiveness of such attitudes among my fellow cis gay men. I don’t know. What I do know, though, is that our equality is in no way enhanced by denying the same to others. What’s more, Transport for London’s move, while wholly welcome, is hardly revolutionary. The simple (so simple, even my German Shepherd could comprehend it) truth is that while ‘ladies and gentlemen’ excludes our non-cisgender friends, ‘hello, everyone’ is all-inclusive, inoffensive and, frankly, nothing to get your Aussiebums in a twist about.

Cis gay men, as a whole, must do better. While we continue to dominate at almost every organisational level within the LGBTQ+ movement, we must use that modicum of privilege to amplify the voices of those who are so often silenced. As a wise non-binary friend of mine once said, ‘LGBTQ+ people might sit uncomfortably together under the same umbrella, but it’s the same rain that falls on us all.’ When cis gay men nudge our gender-variant friends out from under the umbrella to keep ourselves from getting wet, the downpour only becomes more torrential.