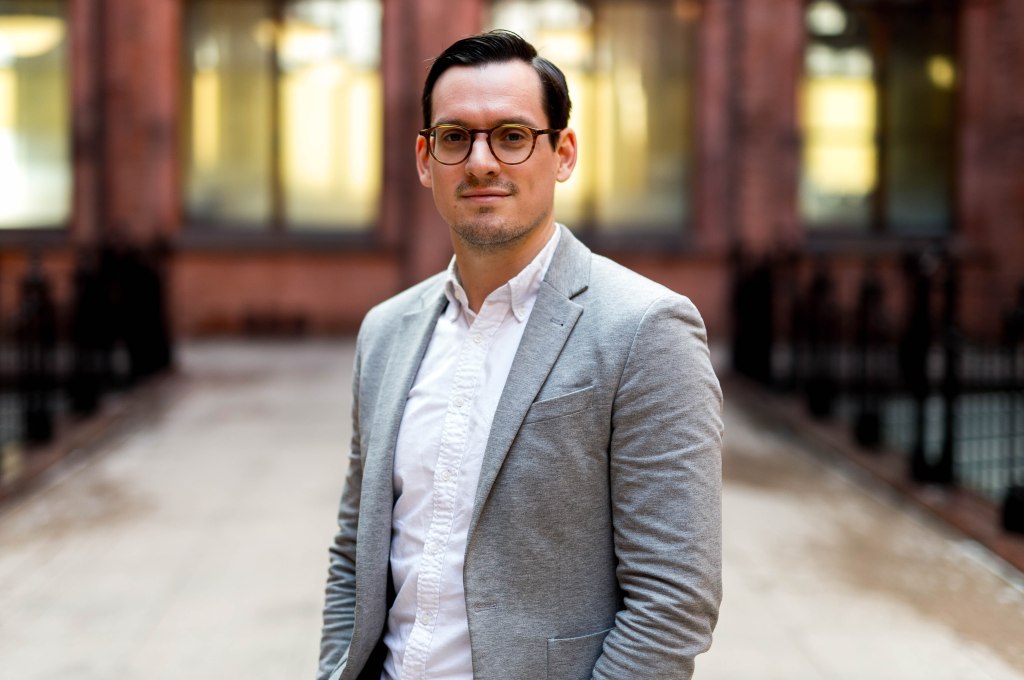 Hadley Stewart sits down for a chat with Chris McCrudden about his second novel and a myriad of other projects.

The rainclouds across London part long enough on a Sunday morning in late September for Chris McCrudden and I to meet to discuss his second novel, Battle Beyond the Dolestars. We sit down in a bar in King’s Cross, which McCrudden describes as “a bar that also attempts to serve coffee.” His first book, he tells me, was years in the making with McCrudden facing several rejections from publishers. “I struggled to get it published because it’s a mix between science fiction and comedy, which is an awkward place in the genre.” His second book, however, was written in under a year and has received positive reviews from original readers, as well as garnering new sci-fi fans.

The characters of the Battlestar Suburbia series might sound familiar to readers. There’s Pamasonic Teffal, a breadmaker, and Sonny Erikzon, a smartphone. There’s even a nod to queer characters, with two lesbians, a gay man and a drag queen. McCrudden brings these domestic devices to life in this sci-fi adventure lead by a hairdresser-turned-admiral, with his books exploring rebellion, our relationship with technology, class and inequalities. “The first book is about the conditions that lead to a rebellion,” explains McCrudden. “And then what happens after a rebellion? How do people cope with that? How do they react to it? What does a society that is pushed into a state of social unrest and war? How do people change?”

This notion of space having a north is something that McCrudden was particularly interested in exploring. “Who cleans the Death Star? Because somebody had to, but nobody talks about them. You never see the cleaning staff of the Death Star.” McCrudden tells me that social class is rarely evoked in the genre. “In Star Wars, they have those lightsaber fights and gun battles, but then somebody must come in with a mop. So then I start to think about the premise of, in space there must be a kind of working or servant class.” In this instance, McCrudden puts robots into that class, but then flips the power structure and asks, “So what if robots were the people in charge?”

As a gay man born in South Shields, in the North East of England, McCrudden’s first-hand experiences of class and social inequalities merge into his writing. His essay, Shy Bairns Get Nowt, was recently published in an anthology of working class writers, Common People. So does being Northern trigger his creative mind towards exploring notions around social class? “Yes, totally!” he replies. “I lived in the North for 28 years. I was born and grew up in the North East and then lived in Manchester. I’ve spent the bulk of my life there, it’s where I come from and where so many of my life experiences come from.”

Battle Beyond the Dolestars might be a work of fiction, yet its themes about political and social unrest can be reflected in today’s society. McCrudden’s observations of what is happening politically in the twenty-first century being utilised as creative inspiration. “Given all the spectre of shit around Trump and Brexit, I started writing about what happens to a world that is sliding into fascism and populism. And how do you find accommodation there, what do you do when you’re asked to be part of a system that you don’t agree with.” The challenge for McCrudden here? “I must also add that I was trying to do this with jokes as well.”

Does he find writing funny difficult? “I find it easier to write funny than I do to write serious, but that’s just my natural register,” he says. “It’s very difficult to get a physical joke to come off on the page. The way that I write comedy is that it comes from character. What is it about this character that makes them funny? And often that comes from taking one person who is comfortable in one environment, and then putting them somewhere they’re uncomfortable. And they have to be in that environment, because it’s what drives the plot forward. So in the book, what would happen if a backstreet hairdresser became the leader of a resistance movement almost by accident?”

As the rain makes an unwelcomed appearance, we retreat indoors from our table outside. I ask McCrudden about the realities of being an author in 2019. He has tweeted in the past about how much authors make in this extremely competitive field, which does not always yield sufficient monetary reward. As somebody who writes alongside his day job in PR, how does he feel about the way we talk about money and writing books? “Most authors do not make their money writing books,” he shrugs. “We get quite angry about this, because I think we have a number of dishonest conversations about what it means to be an author, in the present day.” The Society of Authors, of which McCrudden is a member, advocated for authors to receive a minimum wage. He doesn’t seem to think that is the solution. “Well that’s just not realistic,” says McCrudden of this idea. “That’s just not economic.”

So what is the solution? “If we were having more honest conversations, then authors would say, well I write books and I also do something else. Publishers would be doing things by structuring their businesses and their deadlines to accommodate this.” McCrudden says deadlines are particularly relevant to those who have jobs alongside writing, admitting they can “make you go a bit crazy” as authors attempt to juggle financial realism with their creative endeavours. “I think deadlines in particular are a big issue that we’re not talking about enough, so that it is possible to be an author and to make enough money to survive in the world,” he explains. “I think agents do their best in that kind of environment, but publishers could be doing more to work in partnership with their authors.”

I remark that very few writers speak publicly about money, and how most of us aren’t surviving solely on what we earn from our commissions. “There’s a very cultural idea out there that a writer is somebody who writes full time,” replies McCrudden. “It’s almost like there’s a fear that if you admit to doing something else as well as writing, that somehow discredits you as a writer. Which is ridiculous.” Does he think this is because authors don’t want to lose the romantic façade that is built around being an author? “I just don’t think anybody has challenged it in the right places. And I think it comes back to things like this, when writers get interviewed about their books, something that they do with twenty percent of their time. They don’t get interviewed about what they do with the other eighty percent of their time, so that instantly creates this idea that we only do one thing.”

As for what McCrudden has planned for the future, he is certainly keeping himself busy. A mere three projects are in the works. “I’m working on three things,” he shares. Just three, I reply, and he laugh. “I’m going to be doing a short story based on the Battlestar Suburbia world, which will be coming out next year. That is going to be inspired by book two. And then there’s also an offer on the table for book three. I already have the first ten thousand words for book three, because I started it thinking it was the second book, when actually it is the third book. So I have a start there, theoretically.” Readers who enjoyed McCrudden’s exploration of class will also be excited to hear of another novel he’s currently planning – social class in the world of magic.