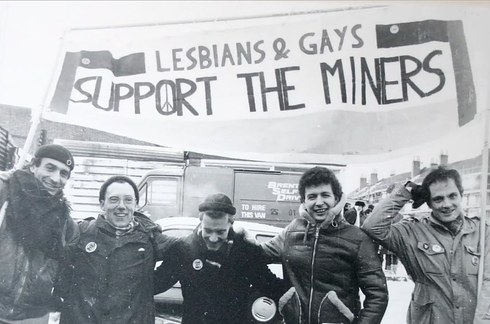 As part of our Queeroes series to mark LGBT History Month, Lee Williscroft-Ferris explains why the members of Lesbians & Gays Support The Miners are a personal inspiration to him and catches up for a chat with Jonathan Blake.

I grew up in the 1980s. My dad was a miner and my family was deeply affected by the miners’ strike and the subsequent fallout. Nowadays. I’m a committed trade unionist and a member of the TUC LGBT Committee.

I was beyond excited when I heard about the film Pride. Combining gay rights with the struggle of workers to make their voices heard in the face of a Tory onslaught (sound familiar?), it sounded almost too good to be true.

Admittedly, I had not heard the story behind the film before. In case you haven’t seen it yourself, Pride tells the tale of Lesbians and Gays Support The Miners (LGSM), a group of London-based gay rights activists who decide to raise funds for striking miners in the Welsh valleys. Despite an uneasy start, this most unlikely of alliances blossoms and firm bonds of friendship are formed. As with any celluloid interpretation of an actual historical event, Pride does take some liberties with LGSM’s story, although the key elements are portrayed faithfully. 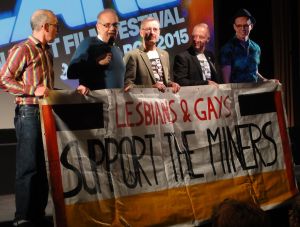 LGSM are my personal Queeroes for a number of reasons. For me, the group represents the best of intersectionality before it entered common discourse. More importantly, this was a group of people for whom the inherent risks involved in choosing to support the people of a remote Welsh village were irrelevant. The compulsion to help fellow humans in dire need was overwhelming. It is nigh-on impossible for many of us to imagine the daily discrimination faced by lesbians and gays in Britain at that time, although Pride does a great job of depicting the harsh realities of everyday life for gay people at the time. To open themselves up to potential rejection and ridicule in the name of solidarity was immensely brave. Furthermore, it serves as a lesson on selflessness and the power in uniting to fight a common enemy.

The fact that LGSM’s solidarity was reciprocated by the enduring support of mining communities and the National Union of Mineworkers is proof of the entirely unforeseeable impact this alliance had on Britain’s lesbian and gay community. In leading London’s Gay Pride in 1985, block voting in favour of gay rights at the Labour Party conference and speaking out against Section 28 in 1988, the miners and their families repaid the debt of gratitude to their friends.

LGSM had no idea when they began shaking their donation buckets outside Gay’s The Word that their altruism would have such a profound impact on furthering the socio-legal position of their fellow gay men and lesbians. It’s precisely because of this unconditional, principled compassion for others that I consider Lesbians and Gays Support The Miners to be my personal Queeroes. I was proud to join LGSM at their pre-London Pride party last summer and to find myself busting a move to Bronski Beat’s ‘Why?’, alongside Siân James, Jeff Cole and co. If only London Pride had seen fit to honour LGSM’s immense contribution to our community by having them lead the parade on the 30th anniversary of that momentous day in 1985.

I caught up Jonathan Blake, member of LGSM and prominent character in Pride, to talk about the film, the progress made towards LGBTQ+ equality and the hurdles we still face. 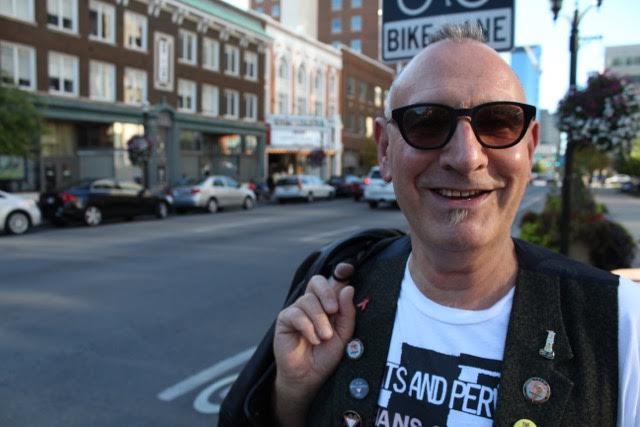 TQ: What was your reaction when you found out that LGSM’s story was being made into a film?

Jonathan: Somewhat disbelief, then Stephen Beresford came and interviewed myself and my partner Nigel – not Gethin in reality – and after it, I thought ‘I doubt this will go anywhere’. Yet, 15 months after, I got a call from him , we met again and it was true and it was happening.

How did you feel the first time you saw Pride?

The first time I saw it, I found it really difficult; I felt the weight of all those no longer with us, lost to HIV/AIDS, so I said to Stephen that I needed to see it again, which I did. I thought it to be an extraordinarily honest encapsulation; he understood the issues and although certain things are tweaked for dramatic purposes, he has caught the essence.

Was there anything about the film you weren’t quite so keen on?

In all honesty, I was really taken by the film. I think Stephen has written a remarkable screenplay and Matthew Warhcus realised it amazingly. We we unaware or shielded from any homophobia so it was for dramatic purposes that we have the homophobic character in Cliff Grist’s sister-in -law.

What lessons do you believe we can learn today from LGSM’s collaboration with the mining community in Wales?

Solidarity is so important and the coming together of disparate groups is so empowering; that is something which I hope folks will take away from this.

What are your thoughts on the current government compared to the Thatcher years?

The current government is the scion of Thatcher; without Thatcher they would not be . Frankly, though, the true son of Thatcher was Blair – he created ‘New Tories’, not ‘New Labour’.

You’ve seen massive progress in terms of gay rights since the 1980s. How would you assess where LGBTQ+ people in the UK are in terms of equality?

Well, there certainly has been a huge change; when I was born it was illegal, so for the age of consent to become 21 when we were ‘decriminalised, then lowered to 18 and finally to parity with heterosexuals at 16 is massive. There is still a way to go. After all, there is still huge discrimination towards the trans community, but at least that is now on the agenda and getting talked about more.

What do you think the next big battles are on the equality front?

Dealing with stigma around HIV across all communities.

You’ve been living with HIV since 1982. What would your advice be to anyone diagnosed HIV+ in 2016?

Get as much information as you can cope with; it’s still a huge thing to deal with. If you can tolerate the medications, that’s great but there are still side effects and stigma is never far from the surface. Also, I worry that young LGBTQ+ people think that because we have pills – and now PrEP, all is well. It isn’t – there is still no vaccine and no cure.

How does it feel that LGSM have been named one of OUR Queeroes for LGBT History Month 2016?

Finally, what do the next twelve months have in store for you?

Who knows, but the adventure continues. I have been very fortunate.