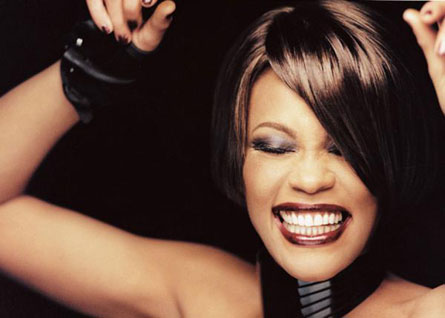 As part of The Queerness’ Music Month, Marcus Stow discusses the impact and legacy of Whitney Houston, for the music world and him personally.

It was back in November 1985 and my cousin – a big Michael Jackson fan – and I sat around her record player listening to 7-inch vinyl singles. We discussed the merits of two soulful hit ballads, Whitney Houston’s ‘Saving All My Love For You‘, and Dee C. Lee’s ‘See The Day‘, which were both vying for number 1. Whitney’s single depicted a beautiful woman intimately crooning into a microphone, the song a jazzy, soaring pop ballad. She won that particular chart battle, scoring her first number 1, while Lee peaked two places below. There was, at that point, no inkling of the superstar Whitney was about to become.

I pretty much forgot about Whitney until the 1987 media blitz that accompanied the launch of the first single from her second album, Whitney. The song was called ‘I Wanna Dance With Somebody (Who Loves Me)‘. It had a heavily produced uptempo pop sound, but it was the stunning vocals that lifted it far beyond the realms of the ordinary. My lonely heart did indeed CALL when that key changed. Churlish critics criticised her for being too perfect, too polished. And to an extent, she was.

She was presented as a pristine diva, in ball gowns that belied her mere 20-something years of age. With a voice that was precise yet powerful, very much church yet tightly controlled for pop appeal – sometimes by Clive Davis asking her to not sing “too many notes”. With her light-skinned beauty, she was packaged to appeal to middle America in the Cosby Show era. And she did to the tune of 20 million+ copies sold of her first two albums in the USA alone.

The song was called ‘I Wanna Dance With Somebody (Who Loves Me)‘. It had a heavily produced uptempo pop sound, but it was the stunning vocals that lifted it far beyond the realms of the ordinary.

Back in Lancashire, UK, I quickly became obsessed, playing her albums constantly and painfully (for them) regaling my classmates with my own renditions of her songs at break times. Like many a queer boy, I indulged in diva worship before I had even acknowledged I was gay. I remember having quite intense crushes on classmates at the time, and maybe her songs of love and heartbreak stirred some subliminal emotion. Even though Whitney was leaning towards pop at that point, I developed an interest in American soul music, artists such as Alexander O’Neal, Luther Vandross and Anita Baker. This gave me a certain connection with a black youth culture I was denied in my all-white school.

I wasn’t the only person who wanted to sing like her. She quickly became the standard to which all other singers were judged in a pre Auto-Tune world. Record companies wanted the next Whitney. Without her, there would have been no Mariah Carey or Celine Dion, along with countless other singers who cite her as an inspiration. And even today, you can hear her influence in shows such as The X Factor and American Idol, where hapless contestants strain to mimic big-voiced divas and are often warned of the dangers of covering Whitney.

I can clearly remember what I was doing when I heard a new Whitney track – when Radio 1 announced the first play of ‘I Will Always Love You’, I quickly found a tape in my student digs in Leeds and recorded it off the radio, stunned at just how she had absolutely nailed the vocal. I remember my astonishment at the cool contemporary R&B of the My Love Is Your Love album tracks when they aired on the radio for the first time. “That’s Whitney?” I asked my flatmate in Streatham as the smooth contemporary R&B of ‘Heartbreak Hotel‘ played. The soundtrack of a life, indeed.

I wasn’t the only person who wanted to sing like her. She quickly became the standard to which all other singers were judged in a pre Auto-Tune world. Record companies wanted the next Whitney.

With the dawn of the internet, I took my diva worship to messageboards. Youngsters these days talk of the “stan” wars on Twitter, but the Beyhive and Rihanna Navy have nothing on the diva wars that raged back then. Sales stats were pulled out: (“Madonna sold more” / “But Whitney has fewer releases – she sold more on average per album”). Octaves were compared: (“Mariah has eight octaves” / “Girl, how? That’s a whole damn piano!”). But behind the cattiness, here was a community well represented with queer black men and women. In short, people like me, and some of them I still talk to on social media 15+ years later. She united black queer boys across the planet, even though her act was profoundly heteronormative.

I saw her in concert three times. Keeping dance moves to a minimum, it was all about the voice. She never sang a song live the same way twice and you could always feel the band second-guessing where she was going with the song next. She was very much in control in a way she wasn’t on her earlier recordings. On the I’m Your Baby Tonight tour in ’91 she could do anything she wanted vocally and she revelled in it. Her ’99 My Love Is Your Love tour showcased a grittier, more mature, but still amazingly dextrous Whitney. Finally in 2010, there was a concert at the O2 where there were a few flashes of her former brilliance, but the vocal decline was sadly all too apparent.

But there’s been miles of columns written about the causes of her decline in recent years and not nearly enough about what made Whitney great. It’s not just about her beautiful tone, powerful mid-range and legendary vibrato: It’s the way she tailored her gospel influenced vocals to many genres, from pure pop to gospel; from the sultriest ballad to high-energy club mixes. Consider, for example, how It’s Not Right But It’s Okay works as uptempo R&B, EDM and as a slow jam. It’s the way she turned humdrum material – some of which had been minor hits for other artists – into gargantuan smashes.

I saw her in concert three times. Keeping dance moves to a minimum, it was all about the voice. She never sang a song live the same way twice and you could always feel the band second-guessing where she was going with the song next.

For examples of the masterful subtleties, listen to the second verse of ‘I Will Always Love You’ where she actually sings the word “Bittersweet” bittersweetly. In the final verse of ‘Exhale (Shoop Shoop)‘ in the line “sometimes you’ll laugh / sometimes you’ll cry” the word “laugh”is bent into a laugh, “cry” into a little weep. It’s these subtle details that were the icing on what was always a very big cake.

So while her music, influence and legacy lives on, the record labels never found “the new Whitney Houston”, because there will never be another Whitney Houston.