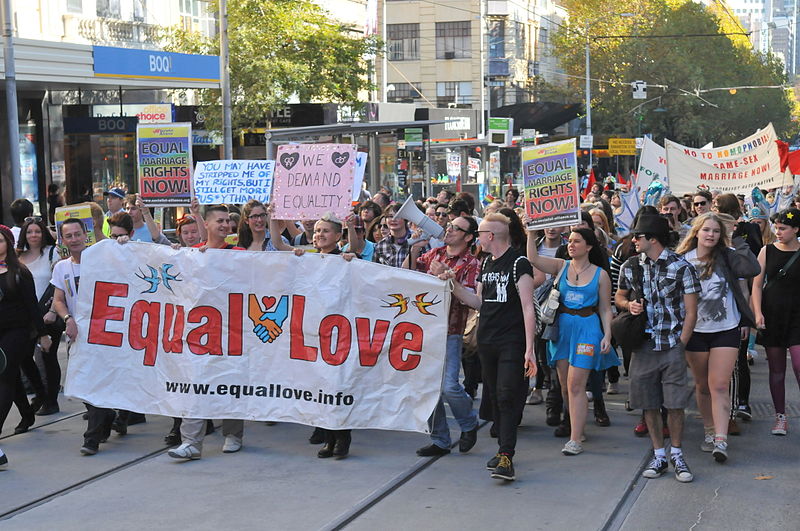 Australia passed a marriage equality bill Thursday allowing same-sex couples to marry, Andrew Macdougall looks at the effects it has had on the LGBTQ+ community.

My mental state by the end of the campaign for marriage equality and the human rights for LGBTQ+ people, looked much like my pride flag that flies proudly in my front yard. Withered, torn and looking exhausted after a long push to right the wrongs of 13 years ago.

When I think about the marriage equality debate, I think about my friends, myself and the LGBTQ+ community. I think about the struggles, abuse and mental anguish which has inflicted years of pain on every queer person. The hardship, discrimination, and people we have lost throughout the journey, in the never ending fight to simply be yourself.

When the Smith bill was finally passed, it took a step towards healing some of the wounds which the LGBTQ+ community has been given. I then thought about the positivity that the campaign had created, the coming together of a community which often has its own issues within itself.

LGBTQ+ people who never made a big deal about their own sexuality, thrust themselves into the spotlight, marching at rallies and using social media to support the marriage equality campaign. The term pride couldn’t have been more fitting throughout the whole process.

Friday morning walking through Geelong I noticed a trend which has been continually growing since the campaign for LGBTQ+ human rights within the marriage act was ramped up recently: same-sex couples openly showing affection.

Seeing same-sex couples holding hands, kissing and being openly public about their love has come through a direct correlation with the marriage equality campaign as people begin to feel more accepted and equal in the community. In a town where this is not often displayed, it is the positive light from a plebiscite that had given a platform to preach hatred, misinformation and hateful bigotry against the LGBTQ+ community and divided families.

Decades of campaigning, discrimination and emotional rollercoasters culminated in the House of Representatives passing a bill on Thursday allowing same-sex couples to marry. Only four MPs voted against the bill following the non-binding postal plebiscite which returned a 61.6% yes result.

As “I am Australian” was sung from the public gallery following the bill passing, it was an historic moment for Australia, it was a moment where I was proud to be Australian and even prouder to be LGBTQ+.

Only four MPs voted against the bill following the non-binding postal plebiscite which returned a 61.6% yes result.

Social media continued the trend with LGBTQ+ people posting coming out stories, emotional stories, and love stories as it opened the door of acceptance allowing people the ability to feel comfortable with who they are.

The Yes! campaign pushed the power of positivity through their own stories, while it has given sections of the no side a place to vent discrimination, it has created a cultural shift for the community and moved the mindset of many LGBTQ+ people. Those who lost hope, never thought about the possibility of getting married, now have thoughts about maybe one day saying “I do”.

Australia becomes the 26th country to legalise same-sex marriage, LGBTQ+ couples won’t be able to legally get married until Jan 9, 2018 but will be able to file a Notice of Intended Marriage from the weekend.

Whether you identify as lesbian, gay, bisexual, transgender or intersex the Smith bill and definition of marriage affects us all, we all have a footprint in the story of what it has taken to get here, each LGBTQ+ person has played a role in the search for equality.

Complete equality isn’t done by changing the definition of marriage, but there is hope that the LGBTQ+ community is inching closer to finding it.

Just like the flag I so proudly display, we will acknowledge the weathered journey it has been on. Embrace the achievement, dust ourselves off and begin the next phase of LGBTQ+ human rights.

Right now though, we will celebrate this moment. Australia grew up, just a little bit.