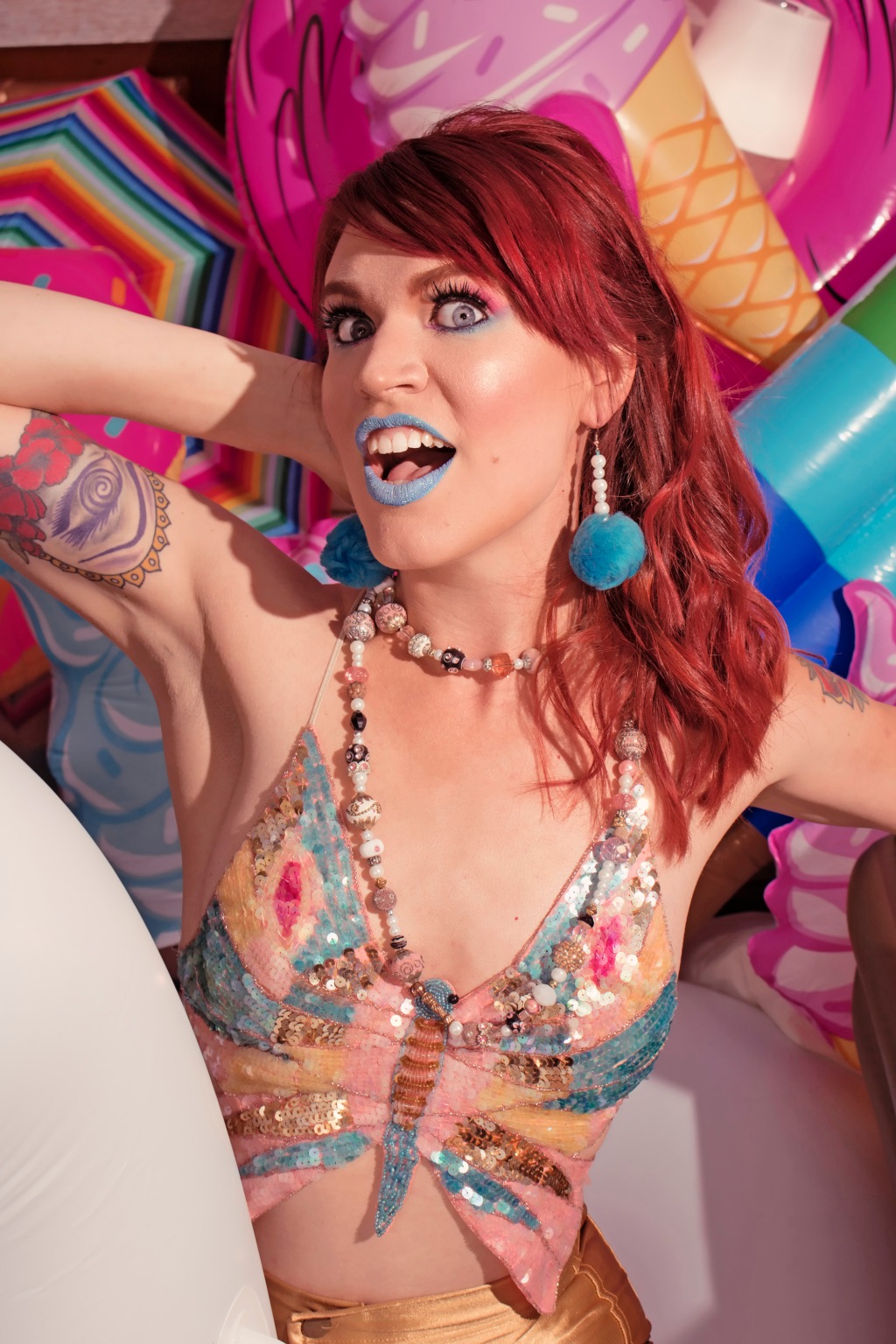 Megan Rosalarian is a queer comic creator, artist and burlesque dancer. As a creative who makes a living from the web, she has been very vocal about the recent threat to Net Neutrality in America. Lois Shearing caught her with to discuss the issue, her feelings about labels, and her plans for 2018.

TQ: You’ve spoken a lot on social media about net neutrality. How do you think it’s repeal would affect queer creators?

I’ve been putting my work online for fifteen years. The internet has changed a lot in that time. Self publishing online used to be something we did because traditional publishing wasn’t an option for us. It was hard to get paying gigs for queer content. I never actually thought I would have a real career in comics. But the internet changed and the internet became an important part of everyone’s lives and putting content there is now seen as a legitimate and smart method of distribution.

It has been a much more even playing field than traditional publishing. It isn’t perfect, but if you create something and find a home for it and an audience for it, not only are there no gatekeeping businessmen to tell you it’ll never sell, there are now tools to help you sell it.

Without net neutrality, my own little individual rosalarian.com website isn’t going to be included in anybody’s special internet package of websites that will actually function. People will pay for Facebook, and we’ll see more and more content creators trying to put work there, because you go where the audience is, but any queer person knows how queer content gets treated on that site. From their “real names” policy to their terrible criteria for what is considered “offensive” and removed, a lot of us will get choked out by other people’s rules.

If I have to rely on a platform that has strict rules for what I can create, I won’t be able to create anything challenging

I’ve seen so many queer and especially trans creators have their pages just deleted out of the blue because a bunch of backwards people decided to attack them and report them for saying something pro-trans. I’ve had so much stuff reported and deleted from Facebook that I hardly think to use it at this point. If I have to rely on a platform that has strict rules for what I can create, I won’t be able to create anything challenging if I want to have a stable career. I’m just not sure how I can keep making the kind of work I want to make outside of a neutral internet.

You caused some controversy on Tumblr with a comic you did about different types of lesbians. Do you think there’s too much emphasis on having to fit labels in a certain way?

I envy people for whom a one word label encompasses their identity accurately. For me, and a lot of other people, my identity has always required several paragraphs of explanation to fully describe who I am, so labels have always just been shorthand. You don’t always have time to deliver that ten minute speech about your identity. Sometimes you have time for one word, and you pick the one that is closest.

Labels are good for helping us find like-minded people, but we have to keep in mind that like-minded doesn’t mean same-minded. Lesbians are not a hive mind. Terms like “lesbian” are not scientific. They’re cultural, and they change over time. “Lesbian” used to include any women loving women. Now it’s come to mean women who exclusively date and love and have sex with other women.

I’ve always railed against the idea that using an identity label meant consenting to a list of behavioral rules. People are way more complicated than that. Just the fact that we attempt to use one word to describe both sexual and romantic orientation goes to show how limited these words are. Sex and love are not the same thing. Some people prioritize one or the other, and may decide their romantic orientation is the primary label they’ll use, and for others they’ll identify by their sexual orientation.

We have to make space for that, or we end up gatekeeping so narrowly that most of our own are left outside.

Tell us a bit about your journey to realising queer was the best label for you?

I came out as a lesbian when I was 15. And for many years, I was a lesbian. I had zero attraction to men. I gave it my best shot, enough to “tarnish” my gold star, and felt nothing.

Then, a few years ago, that changed. Curiosity became experimentation became revelation. Sexuality is fluid, but a lot of the LGBT community only seems to celebrate that when it’s a formerly straight woman suddenly developing feelings for women.

The idea that a lesbian could change challenges a lot of lesbian politics. Lesbians are often hounded by men trying to “turn” them and it’s insulting to have your identity attacked. I do understand that. Women like me undermine their argument, but it’s misplaced anger. I still only have relationships with women, and I prioritize romantic relationships, so by my own personal rules I could still call myself a lesbian. But I got tired of feeling excluded, I got tired of having to constantly defend myself and explain myself. I got tired of rampant bi and transphobia in a lot of lesbian spaces. Which isn’t to say all lesbian spaces are like that, but enough that I gotta say to the progressive lesbians, y’all gotta step up and clean your house better.

So it was time to find a new label. I could accurately call myself a pansexual homoromantic but that doesn’t really roll off the tongue, so I wanted something more shorthand. I looked at who called themselves queer. It wasn’t just that they weren’t heterosexual or cisgender. They were fighting for sex worker rights and labor rights and black trans lives. They were still mad at the HRC (Human Rights Center) for removing pro-trans language from its mission statement so they could be more appealing in the fight for gay marriage. They recognized relationships didn’t have to be two people striving for monogamous marriage. They occupied the ambiguity between the narrow labels and reclaimed being a weirdo.

For me, queer culture is saying we are different and we choose to date whoever we want and however we want to and we’re still deserving of respect and rights. Queer has 5,000,000 definitions and they’re all correct.

The queer community is great because we create resources to help each other. It’s not great when some of those people take it upon themselves to decide someone “doesn’t count” and therefore is not eligible to receive those resources. If we’re strapped for resources, I’d rather see that motivate us to fight harder for more resources, rather than determine who’s the weakest link and send them packing.

What’s your advice to other queer people in America right now?

It’s literally a tactic of the right wing to make LGBT and queer people so busy fighting each other that we shake ourselves apart to the point where we lose the strength to fight off the people who are actually attacking us. We need to band together now, and find our strength in numbers. We need to include trans and non binary people and asexual/aromantic people and bi/pansexual people as more than just pawns. We need to be intersectional with other marginalized groups. We need to realize that none of us win unless all of us win.

What inspires your comics and stories most?

I keep hearing, always from cisgender white men, that we’ve run out of stories to tell, and that everything is derivative of other things now. There are so many stories still out there. It’s so rare I see myself reflected in media, and I’m white and cisgender. I have friends who have even more struggles than I do. Really most of my characters are based on people I’ve met who I’ve never seen in media before. I include them because my world includes them and it would be weird to ignore them.

I think I have three or four new books coming out. Maybe five. Assuming my career isn’t imploded by outside forces in six months.

If you want to help her continue running  free crafternoon sessions in London which offer relaxed, alcohol-free support and socialising for queer people, you can buy her a coffee here.